There's a company my company deals with and they are doing a little introduction thing featuring me in their upcoming newsletter, for some reason. They asked me what was the strangest thing to happen during a transaction since I came on board with the company, and I had a really hard time coming up with something. Dealing with neurotic, unreasonable people is always strange because mentally ill people are tedious and sadly predictable in the most silly ways--but that's pretty much a given in about any service-related job.

I wanted to say that nothing at this job even touches the hem of the garment of strange in my book. Managing apartments once I had a resident give notice and I asked his permission to show his loft to a new prospective tenant the on the following day and he said sure. We walked into the space and at all times I tried to keep myself and my A-line skirt between the prospective new tenant and the bong and frisbee of weed on the coffee table. It was sort of a little two-step, but I managed to keep the prospect innocent of the offending articles and vowed to wait until he left the place to show his apartment again.

Then there was the elderly nudist who (still lives there-- My sister manages it now!) wore nothing but hot pants as he rode his bicycle around the property, twig and berries festooned in sadly withered swags oozing unctuously down the saddle-- so said others who live there.

Then there was the time the lady came to look at lofts and brought her pet Capuchin monkey who (ruined!) drank my iced tea, tore up someone 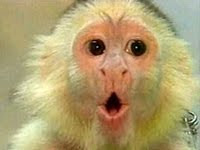 's $1500 rent check, sat on my head and rearranged my hairdo and then flopped on its side looking up into my eyes intently, shoved its hand down its diaper and set to work doing something which could only be described as masturbatory, for reals. The lady kept asking if I'd seen her on the news, she having just won a custody battle in court against the SPCA for the little brute. A few days later talking on the phone to a fellow manager of lofts in the design district, I said it had been an odd week and he said "you have no idea: I had a monkey in my office on Tuesday." I said "you too?" Apparently she was making the rounds in attempt to get attention for herself and the monkey. Yes, here is an actual picture of the actual monkey. I can't see its hands, but I have my suspicion about what they were up to at the moment the photo was snapped. In fact, if someone hasn't throttled the little beggar by now, I'll bet it's interefering with itself at this very moment.

Oh, no. I haven't seen strangeness on the job in a long time.

I'm glad my work involves mainly dealing with computers ... not sure how I'ld go with the monkey!

I have a friend that once has a Capuchin. He was a sweet little fellow, until he grew to maturity and decided enough with the control. The result was hundreds of stitches to repair the damage and a new home in a sanctuary.

Just curious: Why didn't you ask the woman to leave until she could come back without the little bastard?

And people wonder why I don't care for monkeys! In future, I shall just direct them to you.

LOL- And you wonder why I won't work in retail??? LOL

You'd thing a bog-snorkeling business wouldn't do well, but this isn't so. They're very busy--swamped, in fact.

I (finally) see what you did there..."monkey housin' syndrome" SNORT!

The Irish defy description or understanding. But we're lots of fun to have around.