First Halloween in my new home...

When the lovely FarmFamily arrived for my birthday, they brought a few pumpkins from their garden, which they placed on the porch. One day a couple weeks ago, a neighbor brought me a nice homemade loaf of pumpkin bread. The next day, I noticed one of the pumpkins was missing. Those two events are probably unrelated, but it was interesting.
***************************
Little Town is a pretty quiet place, but there are a lot of kids around. Quite a few houses around town pulled out all the stops with the Halloween decorations, and I figured there'd be quite a few costumed little varmints come through.
I bought a 4 lb bag of candy that boasted over 200 pieces, but I felt a little fretful, worried that if I gave every kid a handful (as is my tendency), I might run out. Himself took me over to the dollar store and heroically procured pounds and pounds more candy. Back at the hacienda, I dumped said candy into a big lovely basket, checked and re-checked the front porch light was on, then set out to do quiet things around the house so I'd hear if someone came knocking.
I lit some citronella candles to shoo away skeeters, and I put a few candles in bright glass containers so there would be a little extra light, and waited, me and my 10+ pounds of candy and the dogs cordoned off in the kitchen so they didn't run out when I'd have the door opened.
Then they came. I took a picture of every trick-or-treater who came to the door. They were each and every one the utmost in adorable. Here they are, every last one: 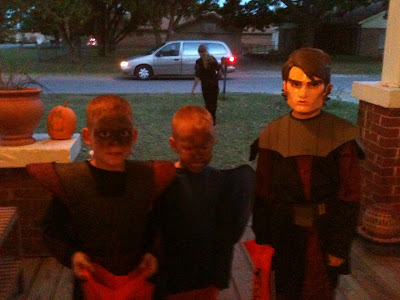 Ninja, dragon and someone from Star Wars. I told them how great their costumes were and then they were off with their lovely mama to the place across the street.

I should have given them about an extra 3 pounds each of candy and just turned off the lights. Next year I'll go help at my parents' place and save the trouble.

Went to a girlfriend's lakehouse for a party Saturday night so the entire Halloween experience wasn't a wash as far as the weekend went. Everyone wore costumes except me. Well, there was one 80-something guy who just sat on a golf cart, but everyone else was a something-or-other. I wore a western shirt, so my girlfriend made me wear a cowgirl hat, and I hung around with an Indian chief for a bit, saying clever crap like "what do you mean 'we', white man?" Several of the costumes were x-rated. There was a flasher guy with an overcoat and a spring-loaded appendage which popped up when he opened the coat. He won an award in the competition, and Cruella de Ville shouted "put it on! put it on!" as he went up to accept his prize. Everyone laughed. There was more than one Dirty Old Man in attendance.

Early in the party, most folks kept one eye on the big TV someone brought out on the lawn to show the Rangers in the World Series, and I have to say it was adorable to see Barbara Bush snapping a photo of her guys out on the field for the first pitch. I'm no sports fan, but I was happy for the general joy of the occasion of local team done good. :)

A bald guy with a very authentic-looking devil get-up seemed a little too eager to get me to hit the hard stuff. I was sipping a 32 ounce iced tea I bought on the way to the party (yeah, I know: boring!) and he wanted to make me a Bloody Mary and get to know me better. "uh, I have a boyfriend" I demurred. He said "is he here?" as if that were all that mattered. I said "no, but I'll bet he'd be here really fast if you wanted to discuss my availability." :P Then it was his turn to demur, wisely. He was older and I figured that combined with a beer-goggles moment-- that by comparison I must've seemed young and fresh. Or desperate or whatever. Inwardly, there was eyerolling.

The old-guy theory was disproven shortly thereafter when a 28 year old guy said he wanted to make out with me. More eyerolling, this time observable. The beer-goggles theorum has yet to be disproven, though. I'm also toying with the notion that people in costumes use them as an excuse to behave very badly. *ahem*

Back to my friend's house, we stayed up late playing cards and then got up and played more cards in the morning. I learned to play canasta, and I quite liked it! Anyway, so the general weekend was good and I've learned something-- clearly, Halloween is only for the grown-ups anymore. Pity, that.
Posted by phlegmfatale at 12:01 AM

So... we'll be seeing the leftover candy at Blogorado next year? Is that what you're sayin??? :-) Ah yeah, parties at our age leave something to be desired...

Uh, yeah, as Old NFO says parties in our time frame leave much to be desired unless they are carefully populated!

Don't be so discouraged - If the prior owner did not encourage trick or treaters, it may take two to three years for the volume to pick up. Also, do you have many kids nearby?

Next year, plan for a dozen kids, no more. And if you got M&M's, you can sneakily make the office get rid of your Halloween candy first by making them the chocolate chips in chocolate chip cookies.