He balled his tiny fists and shook them impotently skyward. 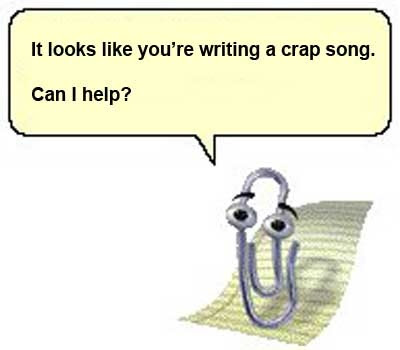 A place I used to work operated more like a dysfunctional family than a workplace.

I had a bit of autonomy and played SWMBO in the main, so I shrugged off a lot of boobery on the part of certain other folk with whom it was my lot to work. Some things were more easily shrugged off than others.

The company owner was a fit-thrower. Things could be rather random, actually, and he didn't rave frequently or I would have hied me elsewhere for a paycheck. Still, when he clouded over, he could be a right nasty piece of work. Such events were infrequent enough and he wisely never ranted at me in my presence, so, whatever.

One day, though, he threw a right strop. Incandescent with rage, he spat and cursed from the other room. Generally, I'd leave him to it, but this day he fumed and ranted and raved on in a not-so gentle crescendo of vitriol which peaked fairly spectacularly in a resounding kick to a perfectly innocent by-stand 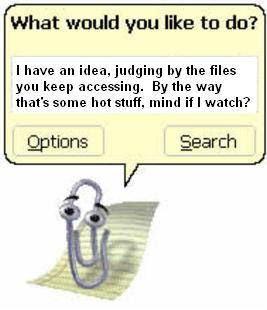 ing filing cabinet. When I think of that day, I always imagine him balling up his tiny fists and shaking them skyward, awash on crashing waves of the cruelest of fates-- something in the world he could not fold, spindle or manipulate to bend to his megalomaniacal will. What could it be?

As I said, my custom is to not give attention to fit throwers. While they may richly deserve a proper beating, mine is not the place in the universe to dispense justice-- woe betide them if I were... However, this day, the doo-doo hissy was protracted to such degree as would not be ignored. My phone calls were being interrupted. Business-- dysfunctional or no-- would not be conducted as per usual. Something™ had to be done.

I resolutely marched into his office and said "may I help you?"

Pointing at his laptop screen, he muttered and grumbled that he couldn't get "that damned thing to go away." 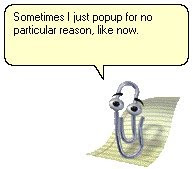 I looked at the screen and saw a perfectly innocent little paperclip looking out eagerly, innocently blinking and longing to be of assistance. I'd never even seen the damned thing before, and I poked around for about 30 seconds and got it turned off. "There you go" I said and flounced out of his office and back to work, never missing a beat.
heh.
heheeheeheeeheeeheee
*much wicked laughter*
bwahahahahahahahaha!!!
It was yet another of those moments when I had to dig my nails into my palms and contemplate dead puppies and the ripping-out of nosehairs to govern my giggle urge.
He'd finally found something more obtuse, bull-headed and senseless than himself-- a match made in heaven.
Somewhere in a pixel-bar, there's a little paperclip ragging on him...
Posted by phlegmfatale at 12:01 AM

I hated the paper clip. Accidently hit F1, and the annoying little fu**** would appear with the the comment: "It looks like you're trying to write a letter." I'd cuss the little bastio until I figured out how to turn him off. I'd wonder about the cruel sense of humor of the programmer that came up with the idea.

ALWAYS one of the first changes I make to any MS Office products.

Clippy is the one feature of that Office release which seemed to flat-out enrage people.

It is good that you were out of there before Word 2007 hit. No Clippy, but the developers rearranged all the menus.

I sometimes do extremely geeky development work on Windows, and, while on the phone with their developer support one day a few years ago, the engineer let it drop that the *spell check* in Word has 20 programmers working on the single feature (design, program, QA).

I always prefurred the cat to the paper clip...waaay more purrsonality.

When the dialog comes up asking you what components you want for a custom installation, you look for Office Assistant, and then take it out and shoot its ass.

Three of my co-workers were standing around a small Honda portable generator trying to get it to start. They were cursing, cussing, and seriously considering throwing the thing into the weeds.

I ambled over, flipped on the ignition switch, and started it with one pull. I just looked at them and walked away without a word.

I still smile about that.