As I'm sure most folks heard, there was extensive flooding in many regions of Texas in May, and my area was hard-hit. Tragically, some folks died in the flooding, and I'll bet pets and livestock were lost in substantial numbers, too. These storms brought tornadoes here and there, and although that peril is never far from a person's mind during particularly violent weather, it's something of a crap-shoot: it's not like an earthquake that's going to break stuff in every single house in a region, including the houses themselves, the roads, etc. Sooner or later, we all get reminders that no region is free of the potential for natural disaster.

On a recent drive to Dallas I noticed water standing deep in a yard where someone keeps pygmy goats. I hope they got the wee goats to safety in time,  but with that kind of flooding, major arteries were blocked all over the region, so there's no telling.

With the advent of the rain, my area went from a second or third year of stage V drought restrictions to no restrictions at all. In the space of less than a month, area water supply lakes that had been at less than 30% of capacity were filled to overflowing. This is the silver lining for the region.

Here and there, you see the after-effects in the form of sandbags put by in case they are needed again. They appeared around the doors and garage entries of houses to keep the flood at bay. Large things like trailers kept for storage were knocked over. Trees were broken or just tumped over with the force of the water coupled with looser, saturated soil.

The river in the area is not a big or deep one, so all that water rushing from every direction to the natural tributary had not much place to go. The rains had been so persistent for so long that the ground was saturated, and there was only so fast it could run off. The overflowing of banks of creeks and rivers was inevitable.

Here's one spot near the Little Wichita River that I drive past usually at least once per week. You can see water on the ground, but this area is normally completely dry. The remarkable thing is how the trees and everything appear to be dipped in a rusty sepia tone up to the high water mark, which I'd estimate is about 12' - 15' high on the trees in the photo. It's a rather startling thing to see, and it's there as a reminder. 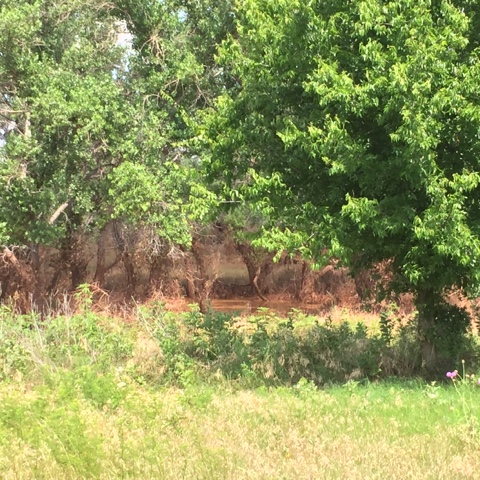 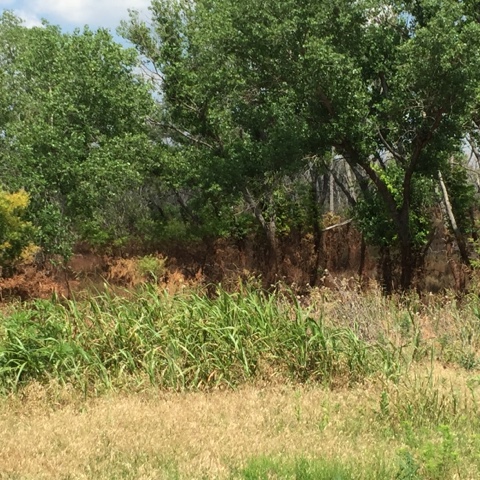 Posted by phlegmfatale at 10:24 PM

And the Red is STILL flooding in Shreveport!

That was a lot of water. Much needed, even if getting it comes with its own problems.