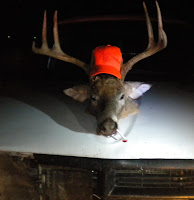 Here's the prototype as dispatched by Ambulance Driver at the first Blogorado in November of 2009, and here's my monstrous creation to commemorate that strangely delightful occurrence.  Well, delightful for everyone except AD and his poor Dodge pickup, but if you're gonna make an omelet, and all that...  Call me Frankenphlegm.  For some strange reason, that chilly night on a dark country roadside in Colorado was a unifying experience, and something unexpected that really drew us together in an enduring and surprising way.  I really think the group is all the more close for that.  Ambulance Driver bore up manfully, considering his truck had just been ganked by the poor beast, and we stood around cracking jokes and huddling for warmth in a show of solidarity as he set to collecting the meat with aid of a sawzall and about a dozen large knives proffered by the helpful bystanders.  Jokes were cracked.  2001: A space odyssey was referenced in movement and music, and lewd discusson of tracheae was undertaken.  Good times.

Spitting image, right?  you would swear these bucks were twins as the resemblance was uncanny.  The antlers on mine went a bit wobbly/wonky, but I forgive them.  I am particularly proud of the craftsmanship of the cigarette.  Next time I make something to explode at Blogorado, I'm going to not start on it 4 days before I hit the road for seekrit location and maybe it will be a little less wobblesome and a little better-hewn.  At the end of the shooting day on Sunday, we put a little rubbermaid container with about a pound of tannerite in a hatch at the back of Splodey's mount. 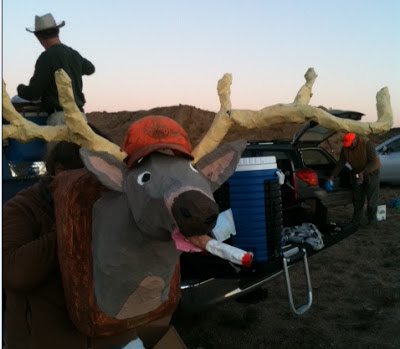 Fittingly, it was Ambulance Driver that made Splodey go splodey.  Poetic, that. :)

As I was making Splodey, I sent Mom and a few friends photos of my progress.  Mom kept saying he was so cute that it was a shame to blow him up. The way I see it, the fact that Splodey was temporal and marked for death really took the pressure off.  Every angle and curve didn't have to be refined or strainings at perfection.  This was basically a growed-up, high velocity pinata and not something to be hung in the Louvre or the Smithsonian.  Yes, it's goofy.  Yes, I should have spent that energy studying instead of this, but I'm glad I did it. I think he was really cute, and he made a lot of people laugh. I call that a good time investment.

Now what will I make next year?  Thanks to lovely but shy spokesmodel Mrs. Sci-FI for holding up the doomed beastie for the photo.

I hope to get my after report on Blogorado up on or before the coming weekend.  For now, school is a whirl and work continues apace. I do hope to be back on track with my daily posts quite soon.
Posted by phlegmfatale at 12:01 AM

HAH!
That's just too much, phlegmmy!

Do what you've gotta, we'll be around!