If I had oodles of dosh, I would definitely have one of these: 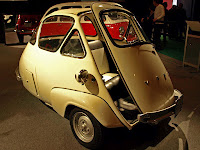 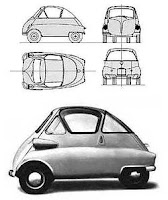 The Velam Isetta is a little bubble-shaped micro car produced after World War II. Produced in several European countires, aparently more than 150,000 of these puppies were built and holds the record as the top-selling single-cylinder car of all time. With cuteness to rival that of a bunny's nose, how could it not have been?

I first fell in love with this car when I saw the chic Fred Astaire and Grande Dame Kay Thompson climb out of one on their way to a beatnik party in late 50s Paris, oozing coolness.

I've seen someone driving one about in England in Kent. Actually, I've seen several very kooky old cars in England, and they all filled me with delight but this one was the holy grail of kooky car sightings.

It's probably not street-legal anywhere in the USA, but I'd dearly love to have one. Come to think of it, I think I saw a microcar of some stripe going to rust a couple years ago in a yard around here somewhere. This merits further investigation. Watch this space.

One of my sister's friends had one of those, back in the early/mid 60's.
My Dad would NOT let her ride in it!
There's basically NO protection in the front if you hit something.
They were neat little cars, though.

My dad's first car back in the late 1950s was a BMW Isetta!! I so wish he'd kept it!! By the time I was toddling around he had switched to Renaults. :(

The Smart car reminds me of Isettas a lot, but it's not nearly as cute. :)

Just think of how easy parking would be! You could park anywhere.

That thing is truly unsafe at ANY speed :-)

Those are road legal in some states. I saw one in New York many years ago with New Hampshire plates.

drjim - Your dad is a wise man. If I got one of those, be assured I'd be mighty judicious about where and when I ever drove it.

purplemagpiesnest - CUTE!!! I suppose he switched because he needed more of a car? Did he have any fond memories of the thing?

Mark - I suppose as long as it has functional signals, it's okay?

About five years ago, I seriously cosidered picking up a Honda 600 coupe. It needed an engine, and I found out how expensive it is to get the parts for the little air-cooled 2-cyl and moved on to the next shiny object. But, I think you do need an Isetta.

As a little kid a neighbour once gave a cramped bunch of us a lift to school in one....fantastic.