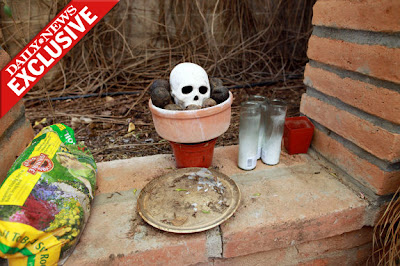 People love categorizing other people because this enables them to compartmentalize things nicely. The idea of how random other people truly are is a disturbing one, so having some common thread with which to sew things up into a more tidy package helps people tuck that idea away for consideration another time (or not at all).

Being of a slightly off-beat bent, I take umbrage, therefore, at the description of the "shrine" that was an ill-conceived collection of crap in the yard of Jared Lee Loughner.

A sinister skull sitting atop a pot filled with shriveled oranges reveals a chilling occult dimension in the mind of the deranged gunman, Jared Lee Loughner...

Ooh, skulls are sinister, aren't they? Skull imagery is everywhere from rock and roll to high fashion. It's almost goofy how skulls are all over the place. Of course, any healthy person wouldn't be caught dead with one. We'd not be found living without one, either, oddly enough.

Shriveled oranges? Well, mine tend not to get past the fruit fly stage, but I've had some lemons go positively rigid-- coincidence? *shrug* I've also seen dessicated oranges in bags of potpourri at Hobby Lobby. Super-creepy! See also the disused containers in which flowers and herbs are sold. Is that in some way symbolic? Satan's oven-mitts, are those flower pots!

A row of ceremonial candles and a bag of potting soil lay nearby, photos reveal.

Who are you going to believe-- me or your lying eyes? Thanks for that riveting description of what may clearly be observed in the photo.

Okay, I have a bin of potting soil. Ceremonial candles? I see these candles more often in Catholic churches. Why were they not described as liturgical candles? Because "ceremonial" reeks of the eerie stripe of hoodoo mysticism that buttresses the authors' point that the gunman was clearly deranged because of the shrine in the back yard. Of course, the same person would probably argue that these are redundancies, because clearly no sane person would ever have a gun to begin with.

I say this is just some random crap that ended up thrown together in the back yard in a THC-fueled freakout. I say this has exactly nothing to do with him being a nasty person who willingly killed a bunch of people. I think if he were truly obsessive and were enacting some sort of ritual-- demonic or otherwise-- he would have removed the UPC barcodes from the candles.

Then again, they are the mark of the beast, right?

Not so much. I'd say murderous asshole who deserves to be held accountable for his crimes.
Posted by phlegmfatale at 12:01 AM

I heard a radio report describing how they'll handle Loughner. The plan is to parade him in front of a judge every four months for an assessment of his mental capability to stand trial. The time limit of this four month cycle is forever. Otherwise, he gets three hots and a cot on the public dime forever, or as long as he fools a judge.

Considering what long term confinement, and anti-psychotic drugs do to the mind, if he's faking, it won't be long until he'll be full blown crazy. Maybe, at that time, they'll go ahead and put him to sleep.

That picture looks like Halloween leftovers and says nothing about the case. I wonder what they'd say about my neighbor who painted her house purple, let her pool get all nasty so "the frogs have a place to live", and has a chair on her roof.