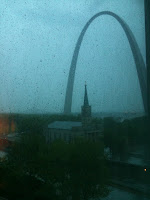 The drive from Texas was absolutely gorgeous. Himself and Matt G had never been to Missouri or the Ozarks, so even though I'm from the Arkie part of the Ozarks, I was very proud to show them some lovely scenery from that beautiful region. We left sufficiently early that we made nearly the entirety of the 11ish hour drive in daylight. The weather was on/off rainy but mostly it was just cloudy and I enjoyed the dulcet tones of my iPod shuffle which seemed to feature most heavily selections from Elbow, Frightened Rabbit, Berliner Philharmonic and Feist, punctuated by the occasional gentle snoring of One Vanilla Gorilla in the back seat.
Arrived in St Louis as it was becoming dark, and we were greeted at the Millennium Hotel by dear friends, some old and some new. We stayed up too late, but it's hard to retire from such dear and rare company. The photo (if it ever finishes loading) is taken from the hotel room and overlooks the Mississippi.
We are at the convention in the pressroom, and you'll be happy to hear that I definitely have the cutest shoes in the room. :P
I'm all agog and about to go into the exhibit hall and I'll check back in with you later. Have a great day!
Posted by phlegmfatale at 8:51 AM

Having the cutest shoes is the most important thing, isn't it?

Of course you have the cutest shoes in the room, I'm not there to challenge you ;)

May the cutest shoes also be the most comfortable! Have fun!

Epic trip. Thanks for letting me tag along.