So I normally would not tolerate such a thing, but too late I learned there was a little bird nesting in a bit of wood work on the porch. She always flutters away when I come onto the porch, but she appears to be a house finch. I LOVE finches!

Anyway, I was reading on Wikipedia about them, and it said Dandelion seeds are among the preferred seeds fed to the young. That would explain why they chose a house on this property: I'm up to my eyeballs in dandelions.

As I said, I would not knowingly let a bird build a nest and rear babies in or on my house, but this one already had 3 eggs when I found it, and I would never destroy a nest with eggs*. We'll keep it here until they fledge and bugger off to budgieland. I'm sure I'll be cleaning poo off the porch in a few weeks. More grumbling on that later. In the mean time, here's a snap of my grandbabies: 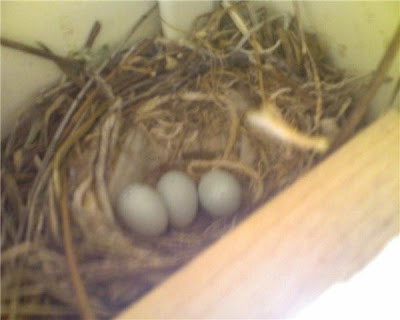 *Except for that Alien in Aliens. Ripley was completely justified in toasting those crocquettes. Srsly. But that was no bird.
Posted by phlegmfatale at 12:01 AM

Cleaning up a little poop for a lifetime experience is worth it. You can be vigilant next year and never allow the building to start, unless you want it to happen.

While it was unlooked-for, I hope you'll find them not to much of a burden, and something of a delight!

I have to add I never thought much about birds, until my wife raised a macaw from a hatchling. I helped, when necessary, which was a daunting task, since you can kill a bird when you overfill their craw. Eventually, you end up with a full grown bird that's totally devoted to their human - unless they're pissed off.

Anyway, they're fascinating to watch; especially when you watch the social interaction.

Beware of the mother bird once those eggs hatch. They are very mean and will peck your head if you get too close and charge you whenever you come outside. My head hurt for a week after that little incedent. Fortunatly, I was able to keep the kids away from the nest and the mama bird did not mess with them, just me.

More mouths to feed :-) Hopefully you can get some pics without getting attacked after they hatch!

Did you know it's against federal law to destroy a migratory bird's nest? I, farm boy from day one, edumacated by the finest hunters' safety class, had never learned that. Barn swallows are the pest d'jour at home, and my mentioning my practice of destroying their nests to keep them away from my porches online just about got me in some hot water. You may already know about that law, but I, my neighbors and other compadres had no clue.