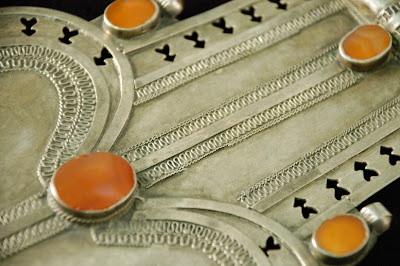 Can I gripe for just a sec?
I thought I could. Thanks.

I've been collecting tribal jewelry for a little over a decade now. I mean, here and there when I was younger, I'd pick up tribal pieces but with no real intent on collecting and not much interest in divining the origin of these pieces.

These days, I do collect and care about the origin of tribal jewelry. I especially love hill tribe pieces from the Turkmenista 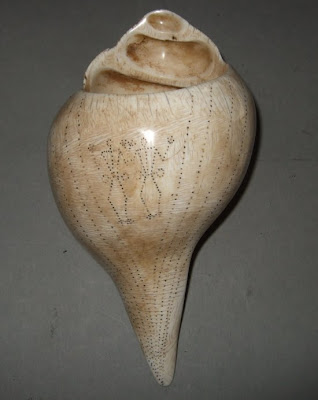 n in Central Asia (Tekke, Turkoman) and the Karen hill tribe silver pieces from the remote reaches of Thailand, and I love the work of the Naga in northeast India and Tuareg pieces of North Africa. In glass I have sandcast beads from various parts of Africa (lots from Ghana) and some sandcast and whitehearts from Asia. When possible, I buy and wear intact pieces, but if I can get my mitts on fragments or loose components, I incorporate those into the jewelry I design. I haven't made a single piece of jewelry in probably 5 years that hasn't included at least some Thai Tribal stuff, which has long been a favorite.

You may have noticed there aren't a lot of tribal jewelry emporia dotted about the country here, so for a long time I've relied on finding pieces on ebay to supplement what bits and bobs I glean from combing the bins at wholesale supply shows. Once was a time when I could do a search in ebay using only the terms "tribal" and "jewelry" and positively scads of gorgeous ethnic pieces from the world over would pop into view. 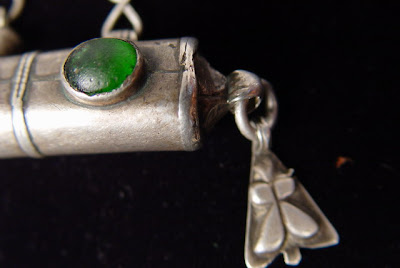 o the maybe 300 or so pieces that truly fit that description, you must now wade through thousands of modern-primitive neo-hippie type crap the denizens of Burning Man perceive to be "tribal."

This is endlessly irritating. In fact, just because it's got that stupid yoga symbol (namaste, asshats!) and is carved out of bamboo or some such does not make it tribal. In fact, I have news for this stinky deodorant-free vegan neo-hippie generation - y'all have turned that grommet-through-the-earlobe and deadlock thing into such a groupthink trend event that I totally swear that your neo-pagan shit is your generation's jellies-&-banana clip. Think about it. Many of you will come to regret the holes in your earlobes you could drive a trac 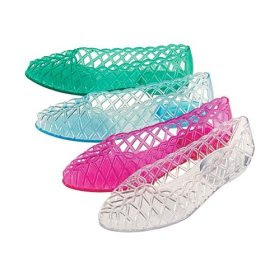 tor through. In that mellow settling-in period of middle age, you'll reflect with horror the possibility of what your children will have to do to rebel against you(prolly be nerdy, wear button-down shirts and vote Republican), and you'll wonder what you were thinking, hanging out with a bunch of folks who were just opportunists looking for a good excuse to be ne'er-do-well wastrels. But you'll go through some real crap before you figure all that out, and my heart goes out to you, really, but in the process, you'll go on futzing about and muddying the waters on what is/isn't a genuine artifact from (some cases) obscure cultures that need to be recognized for superb craftsmanship.
But that shit you're wearing? The new stuff made out of eco-friendly materials by sweatshop kids in India and China? That ain't tribal, baby, and I'm sick of you gumming up commerce by calling stuff what it ain't. Call

it "modern primitive" jewelry, or somesuch. Think of something original (I know, it's hard to do), but that stuff looks too new and too slick to fit the bill of "pagan" that you so love spit-gluing onto everything.

And while I'm at it: hey you! Get off of my cloud!
Posted by phlegmfatale at 2:16 AM

My empathy here - I became burned out on eBay searches when irrelevant popular search words used in descriptions loaded the pages with utter crap.

Maybe you could go to Burning Man next year and perform an exorcism. How can you aruge with this:
"Our mission is to produce the annual event known as "Burning Man" and to guide, nurture and protect the more permanent community created by its culture. Our intention is to generate society that connects each individual to his or her creative powers, to participation in community, to the larger realm of civic life, and to the even greater world of nature that exists beyond society. We believe that the experience of Burning Man can produce positive spiritual change in the world."
Yes, and lighting farts will cure global warming.

Not to worry. The children have an attention span measured in days at best... it will pass, and you will have your niche back to it's quiet former self.

I think fads are silly..... but on occasion can be entertaining. You certainly find enough of the more smiley ones to post here... :)

It sucks that these "new agers" are making you waste your time while you try to find the real deal.

Maybe you should try to organise some kind of campaign to get them labelled as New Age?

I collect tribal art, mostly masks, but a few totems, fetishes and such as well. I insist on the real deal, not Pier 1 crap.

Some of my stuff was acquired either in Africa or Australia while I was overseas. Other items were purchased from other collectors. When you look at the real deal, there is little doubt the masks were danced and the totems shaken.

The crap does make the finding of the pearl more satisfying though, even on ebay. When collecting degenerates into mall shopping I will stop. It's not the collection, it's the collecting itself that makes it fun.

Well, apropos of something, I spent three wonderful months amongst the Karen hill-tribes while building a radar site in northern Thailand back in '76. And I brought back lots of jewelry goodies to The Second Mrs. Pennington who was then my girlfriend/intended. Dunno if she still has that stuff, or not, but I hadn't seen her wear it in years (before she left). Want me to ask? ;-)

Get it all off your chest, Phlegm!

Ya know, my ex-husband's wife is from Turkmenistan. She's ethnically Russian/Tartar, but I'm sure she could hook you up with some stuff.
I know they've got shitloads of Turkmen carpets in their house, and her mom still lives in Ashgabat.

My cousin has those huge holes in her earlobes, and I hate it when she takes the plugs out and you can see the tiny fringe of flesh drooping...ugh.

I coined a term for my sister when she got deep into this sort of neo pagan crap back in the '80s. "Post-industrial Paganism". Think it covers it. Bunch of silly white folks tryin' to piggy back on some other culture, or their notions of some other culture, because they've bought into the bogus notion that being white means they have no culture of their own. They should go online and check out some celtic or gothic stuff and reconnect. then again no. Just go off and take a bath and... Oh nevermind.