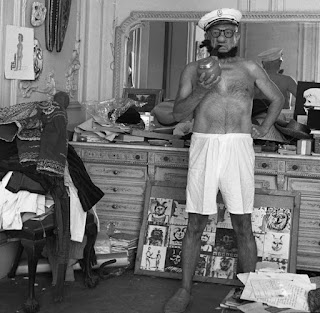 Living in a house with no closets is not conducive to orderliness, but I find that my slovenliness has reached an absolute nadir.  Oh, sure, there are the occasional cursory efforts, the teeny stabs and quick lunges at cleaning, but mostly the stuff piles up around here like so many trappings of the unravelings of an unquiet mind.

So it was with abject glee that I regarded a recent post on Retronaut of this picture of Pablo Picasso in a bedroom.  See the hats and accessories and clothing piled higgledy-piggledy with books?  See the arty scribblings and half-executed projects strewn about?

Anyway, it struck me: I'm a creative genius! That's what this means!

Great googly moogly, it's like someone time-warped my bedroom back to prime era Picasso.  Mostly I don't gad about in boxer shorts and popeye gear, though.  Mostly.

Twisty bendy psychological side-trip-- Picasso always identified with the bull, and a bull in a painting by him was a representation of self.  So what's up with the matador jacket?  Did he have his wife wear the jacket?  Or did he wear it in a fit of self-loathing?

Yes, I'm near demented with fatigue and anxiety. At least I can still laugh at something.

I dug up the superb documentary on The Donner Party by Ric Burns, and it finally hit me: those few people at work being shitty to everyone else, trying to point out the flaws of others to draw attention away from their own?  We're the Donner party.  Rats on a sinking ship.  Eat the others and maybe you can use the stiffs for a life raft.
*********************
Did I mention I have stress?

I got to visit with Mom for a bit and Dad came home from an errand and told us he ran a coyote off from the front yard.  Big one.  Drove it around the neighborhood with the car.  Mom went to bed and I sat up watching tv with Dad for a bit.  The Ken Burns documentary on The Dust Bowl was on, and we watched that until it spooled out.  Gripping show, if you like that sort of thing.

The people in the documentary are quite old, but they were small children at the time of the dust bowl.  One lady choked back tears as she talked about the government paying ranchers to kill their herds that were starving and were too poorly to sell.  Mom said "I remember Dad talking about that" and Dad said "Dad talked about that too!"  Heartbreaking bit of history, that.

Anyway, Mom went to bed and Dad dialed around, landing the tv on a show about the mayan calendar/apocalypse/december 21/yada yada yada.  We exchanged quips.  After a very few minutes, Dad announced he was going to bed and I said i was, too.  Then he asked when my surgery is coming up.  Told him the 13th.  He said "you're gonna be all messed up for the end of the world, aren't you?"

We laughed and laughed.

Posted by phlegmfatale at 11:59 PM

I'll try this on my wife but I can see trouble ahead and most of my belongings heading out the window.

I'm glad you explained the picture. When first I saw it, I wondered, "Why does she have a pic of Lawdog wearing boxers and a yacht captian's hat, on her blog?"