Big Fish and Other Tails.

I was 20 and working at the Bulk Mail Center for the US Postal Service. I was working over at PSM 1 (one of the two main parcel sorting machines) keying mail onto carousels as it came down enormous slides after being unloaded from trucks. Rows of parcel sorting machines ran at obliques from the slide, short series of conveyor belts moving the parcels onto the trays of the carousel where they'd be tripped to drop the parcel into the appropriate slide for further sorting or onto a belt going to the appropriate dock to be loaded directly onto outbound trucks.

Of course, the mail came steadily all day and all night, but in that ever-so-slightly OCD way I have, I liked to knock as much of the work out as possible prior to dispatch tim 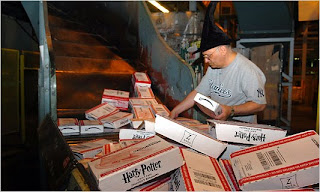 es. I had this odd idea that the mail should be some bastion of integrity. I didn't get the memo that I was the only one who felt that way-- that would come as I reflected bitterly in the latter days of my employ at that filthy armpit of a workplace, but I digress.

So, I was about 20, young, perky and in a generally good mood. I've always been on the gullible side, but even I could tell when I was being snowed.

Gus was an older latin male who worked as a clerk also. He would turn away from his sorter, leaving it running so there would be the appearance of activity on his station, and he'd come over and face me as I worked. Yeah, I was young, usually in a tank top, sweating and working. I found it annoying that I was now doing his work as well as mine-- and that overtime would likely be called. Compulsory, at that. Ugh.

Gus was a wizened, haggard old thing and I was a young little tomato, wasn't I? He was so windy even I couldn't pretend he wasn't full of crap. For some reason, Gus felt it vital that he let me know his romantic pedigree. I can't imagine what he thought that would accomplish, but at some point, he crossed over from tedious and boorish into downright insulting and cringe-inducing.

The story unfolded that Gus had been in the army stationed in Germany, and on weekends he'd go to Amsterdam to visit the "ladies." He said after his initial visits, he no longer had to pay for their company, but would simply give them a pack of cigarettes. They soon were begging him to stay the weekend, the women erupting into full-on brawls over who would win Gus' favors for the weekend. After weeks of these stories and me offering up a stony silence, I finally had had enough.

One night, the tale reached its zenith with Gus saying "I tell you, they loved me so much that in the end, they were paying me. Rita, I have been with some of the most beautiful women in the world."

I looked Gus in the eye and said "So have I."

Gus' mouth snapped pursed, he turned back to his sorter and he never spoke to me again. I never missed his company.

Don't hate me because I've had such glamourous careers, m'kay?

Love it! Perfect one-liner shut down!
I bow before the master (or mistress).

SO not surprised you wicked-tongued thing you!
Rip 'em to shreds!!

You naughty thing, you.

Awesome, simply awesome.
I wish I were quick with a comeback like that!

Bwahahahaha!
I work in retail. I know precisely the sort of person you describe. I have been asked occasionally why I work in retail; "The high pay and prestige, of course!" usually shuts 'em up. (Ah, the joys of college jobs....)
Don't know if it's an issue or not, but you seem to have mentioned your first name towards the end of the post. I only mention it because a) I hadn't seen your name attached to any posts before and b)I'm a paranoid blogger who writes about work, so I notice such things.