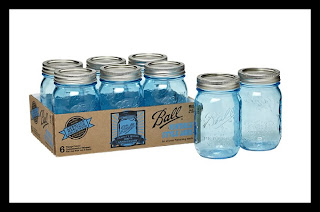 I found these lovely pint jars at the store today. I'd like to tell you I kept my mud in a ball and remained composed and ladylike, but I failed on that score. I bounced and giggled and did a happy dance. There was audible squeeing, I think.

I was sorely tempted to swan madly through the store in a fit of Isadora Duncan-style interpretive dance, gaily holding aloft the lovely set of blue Balls. But I resisted on that count, at least.

Apparently they are a nod to the classic blue glass of mason jars in times past. They have refrained from including zinc lids, though. They are really pretty. I'm going to put by some cherries tomorrow, and I'll probably do at least one of these jars for that. I don't want to waste the pretty color of the cherries on the colored glass jar, though, either.

Himself has gallantly been helping me get my kitchen a little more in order, which is saying a whole lot. It's really a mess and needs complete reorganization. I think with help and taking occasional stabs at it, I may put it to rights eventually. Fingers crossed.
Posted by phlegmfatale at 10:02 PM

I was sorely tempted to swan madly through the store in a fit of Isadora Duncan-style interpretive dance, gaily holding aloft the lovely set of blue Balls.

Which is NOT the male reaction to a set of blue balls. ;-)