Sympathy for the Dauphine 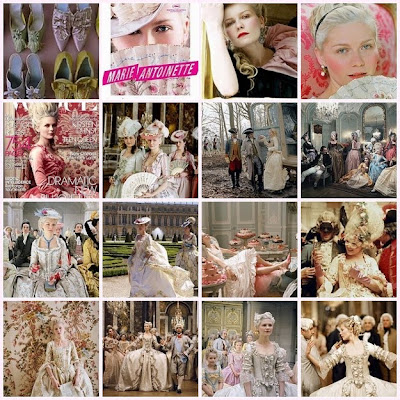 I continue to recover from recent under-the-weatherliness, so I've been staying in and resting. It's amazing to consider that it was 4 short [or long] years ago that this very type of lingering illness resulted in a bout with pneumonia, the second week of August spent in hospital and fighting for my life. So... I'm being still and quiet, not taxing my immune system. I've been watching lots of movies. The puppies love movie time, so it's a great joy to snuggle with them, and that's the best therapy of all. :)

Last night I watched Sofia Coppola's Marie Antoinette, a film nothing short of breathtaking, visually. Not yet 15 when the Austrian girl was wed to the Dauphin to cement the bond of Austro/Franc relations, there was much hope and expectation hung on her young shoulders. She was, essentially, set up for failure, and was the victim of a lot of bad-- often untrue-- public relations. Even knowing this, I expected to find her unsympathetic in this film which does not seek to dull the varnish of what was, admittedly, a most decadent and self -indulgent life. I ask how M.A. could have been other than she was? She was given a narrow set of cattle bars within which to function, and mode of attire was pretty much the only refuge of self expression left to her. For all this, Kirsten Dunst's portrayal was neither vapid, nor insipid. I thought of how frustrating were the circumstances of her life, even before all that Revolution unpleasantness.

The film perfectly conveys how wholly divested of national identity she was, literally, at the handover, a ceremony at the border of France and Austria in which she is made to don only French things, leaving behind all her Austrian maids, her clothing and even her little pug dog. (Nooooooooooes!) She did win some admirers early in her years in France, but she quickly became a convenient target on which to hang a lot of the angst of an increasingly restive French populace. Their social unrest was a festering morass of toxins looking for any thinning of membrane through which to busrt forth, and such a public outsider was very convenient. Courtly society was no kinder, either. Even as she endured vicious prodding and social torments for failing to produce an heir for the first 8 years of her marriage, M.A. was frequently goaded in missives from her mother in Austria that the fragile balance between the two nations was pretty much her entire responsibility, and surely it was all her fault for not having gotten pregnant yet. What a hellish cocktail of pressures that must have been.

I don't know if Himself would have enjoyed watching it (though I'm sure he would have gallantly tried not to nod off had I asked him to watch with me), but this movie is pretty girly. The colors are splendid, the textiles are superb. The chefs who prepared the period food for the film did a spectacular job. (Come to that, I've never eaten a maccaron, and I'm LONGING to have a big plate of them around at my next party!) The shoes were divine, and I think you probably could fill a stadium with the worms it took to produce the miles and miles of silk used for the costuming.

The film is well worth having a look at for the distinction that it is the one motion picture that France has allowed to be shot in and around the grounds of Versailles, and at Trianon and le Petit Trianon. Charming and beautiful, if you like a visual feast, you'll love this film.

Yummy.
Posted by phlegmfatale at 1:52 AM

I'm considering, at the moment, turning on the folks' tv and hunting up something to fall asleep watching. (I'm recuperating from ankle surgery yesterday, removing screws that were put in two years ago. And I'm here, rather than home, because my kids have suffered some severe separation anxiety.) Marie Antoinette sounds like it would require more cognitive ability than I have right now!

I spent six days in the hospital a year and a half ago with pneumonia, fighting a similar battle for my life, which was somewhat shocking because we didn't realize just how truly deathly ill I actually was until after I'd been admitted and in there for 28 hours. (I had a monster blood clot in my right lung complicating matters.) I'm extremely fortunate that I got to the hospital when I did, and that my doctor was so insistent that I had to go (the EMT argued with her about it; even now, we talk about that and shake our heads). I'm healthy now, but it was a scary time.

I'm glad we're both okay after our pneumonia adventures! Hope you feel better soon! (Rest is good for recently-unscrewed ankles and general ickyness from whatever bug ails you.)