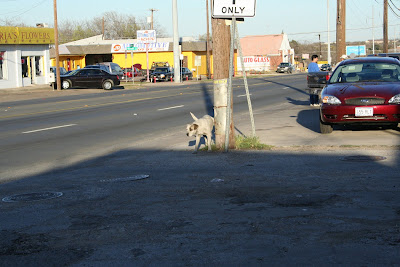 For the life of me I can't remember which one it was, but back in the day there was a Britcom on which someone said "You're uncouth," and the object of scorn replied in a down-market accent "I'm bloody couth!"

Well, do you think this photo is bloody couth? I was going to post a picture of Easter-egg colored buildings along Davis street in Oak Cliff, but then I noticed I was capturing one of the locals going about his business. What do you think-- is this too lowbrow for Dallas Diorama?
Am I couth, or bloody couth?
I also was wondering what color this dog is-- is he gray, milky-coffee-colored, or could he be white under a lifetime's grime?
Poor beast looks remarkably healthy-- no doubt he's sired an impressive number of unwanted pups. Deadbeat fathers are remarkably fertile, or so the Jerry Springer show would seem to indicate.
Posted by phlegmfatale at 11:48 PM

Phlegm,
I thought your color-sense was better than that! He's obviously Ecru, with Camel accents and an Espresso Ear leathers. And Dear me! He is NOT a Dead-Beat Dad...he's been a sperm donor for all those Lesbian Bitches wishing to have litters with their Life Partners.
This picture, comments aside, is Bloody couth.

This photo is definitely couth! It's about as natural an act as you can fine.

Now if you had caught a wino doing the same thing it would have been uncouth, but sadly it's becoming a natural occurence too!

I think we all have lost our couth though...nothing surprizes us in America anymore.

I thought you were going into nature photos!

You have a picture, why the colour debate?

hollyb - well the funny thing is his color looked much more mutable in person - it was really strange. He DOES look more ecru in the photo, but in the flesh, it was almost gray-ish. very odd.

tickersoid - actually, again, what baffled me was that seeing the dog in the flesh, I honestly couldn't tell what color he was -if he was a very dirty white or beige dog, or if he was a pale gray - one of the strangest coats I've ever seen on a dog.

I'd suspect that, like most 'shop dogs', he's probably been spending time in the tire and muffler shops around there, picking up the 'normal flora' one normally associates with little holes in the wall that do quick inspection sticker jobs that the State probably doesn't fully sanction.

The closest he's been to a bath is last month's rain or when he fell asleep in the puddle from the tire patch test tank. He's my favorite kind of dog- a gadabout, man-about-town kinda guy. Answers to noone, does what he wants when he wants. Sets his own agenda. Obviously well-fed. Knows his way around the joint.

He'd be a counterpoint for Doglet. He's the boyfriend with a mohawk and a bad tattoo and a pack of Luckys rolled up in the sleeve of his t-shirt.

Like mushy said, what's more natural? Poor baby will end up a splat on the road one day, so go ahead and let him enjoy the bitches while he can.

Could the britcom have been called "Are you being served?"

rabbit - I love how you've invented this little history that's probably spot-on. Yeah, a counterpoint for doglet. Mama definitely disapproves of him as boyfriend material for her little bitch.

fathairybastard - Yeah, he's rolling with the homeys, smoking blunts and sippin' on gin and juice and for the moment, life is sweet.

darkmind - It may well have been, as that was one of the shows I watched back in the day. LOVED Mrs. Slocum

You know I meant that in a purely academic sense, female dogs, but you did capture the essence.