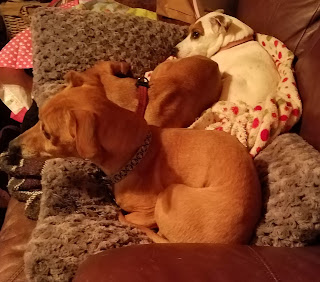 Yes, this is long overdue. This is the most recent photo of my darlings, although its not the best photo. I thought you should have a peek at them. Will try to post another photo soon.

They have been busy gobbling up as many freshly dropped pecans as they can muster. The nuts were huge early this year, but have only really started dropping in earnest in the last few days. It's a strange crop. Many I pick up are too light to have a healthy, edible fruit inside, and it looks to me as though about half the ones on the ground are bad. It is a shame, because I really wanted to share a huge pecan haul with friends, but it seems there won't be so many when all is said and done. Today it took a lot of effort just to gather about 175, and that added up to a handful of pounds, but when they have been shelled, that is not so many. Add to this the challenge of competing with the doggies for the nuts. I also don't want them eating the bad nuts, but as you know, Mochi will eat anything.

This is my mid-term week. Wow. Amazing. I have a massive annotated bibliography due Tuesday, and that is for a 20 page paper that will be due by the end of the semester. I will be pleased to have done with that. In truth, this is a class I would prefer not to have taken, but it is a small program and there are limited options for grad-level courses. I will be glad to have eaten this frog in the first semester, but I still reserve the right to bellyache. More than the misery, though, is the glory of the English Romantics. I'd never read essays by Charles Lamb. For those of you who do crossword puzzles, you know his alter-ego was Elia. Apparently he knew an Italian named Elia when he was younger and liked the name, plus Elia is an anagram for A Lie. All those years doing crosswords and I didn't know the backstory. So, yeah, mostly, the knowledge is rich, interesting, and meshes with earlier knowledge in a way that gives life a fuller feeling. Is nice.

If anyone is reading this, I hope you have a great week.

Posted by phlegmfatale at 6:05 PM

Puppers! They've got their attention on something fer sure.

Good to see the pups again. The pecans at church here in Paris also suffered a similar bad crop as you have. Big empty shells...not sure what happened.